Analytical company TrendForce has conducted a market analysis of notebooks, which concluded on what the company have grown on performance in the last financial quarter, and which on the contrary showed only a relentless decline.

The results of his investigation company shared with the public, reports the Chronicle.info with reference to internetua.com.

So, a report from TrendForce shows that Apple grew by 19.8% over the last year, which is the highest growth among the six leading laptop manufacturers in the world.

Apple CEO Tim cook made the following statement on this subject: ”in Addition we were very pleased with the doubling of revenue from Mac, which contributed to high sales figures MacBook Air and MacBook Pro”.

Acer showed a sharp increase in sales of 38.6% in the last quarter, which allowed the company to stay above Apple in the overall ranking. A complete list of manufacturers of laptops and the places where they settled down in the rankings, you can see in the image above. 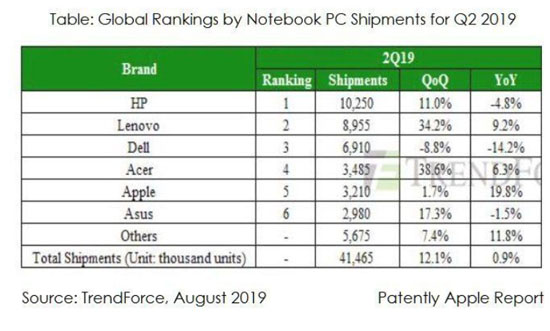